Home All The News F365’s early winner: Nigel Pearson, manager of the season? 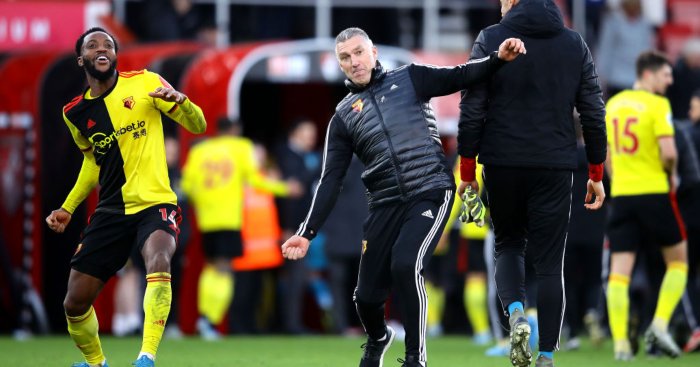 The Premier League manager of the season award should be a one-horse race. Jurgen Klopp has transformed Liverpool into the best team in the world, but Sheffield United’s ascent to become one of the most effective teams in England has thrust Chris Wilder into contention too. However, if Watford continue their current form, the two front-runners will have company while they canter clear of the rest of the Premier League field.

The Hornets looked dead and buried but Nigel Pearson has revived a rotting corpse. A month ago they languished on nine points, six from safety and 10 behind Bournemouth. Today, at the Vitality Stadium, they recorded their fourth win in five games to overtake the Cherries and climb out of the relegation zone for the first time this season.

From being the worst team in the division, one from which neither Javi Gracia nor Quique Sanchez Flores could tease a tune, Pearson has transformed Watford into the Premier League’s most in-form side. Since the weekend before Christmas, no other club has gathered more points.

Pearson is only picking up where he left off four and a half years ago. His last job in the Premier League concluded in 2015 with a great escape at Leicester who subsequently went on to win the title the following year. Seven wins from his last nine matches at the King Power gives the 54-year-old a record of 11 wins from his last 14 games managed in the top flight with sides viewed as relegation fodder. Only Klopp can better that run.

It would be doing Pearson a huge injustice to attribute his early success at Vicarage Road to the new manager bounce. Watford players are so accustomed to seeing a new face in the dugout that it barely registers with many of the squad when a change is made these days.

But Pearson has certainly captured their attention. He did so on day one when he called a team meeting to lay out his survival strategy. “The aim was to get buy-in from everyone involved because we are going to need everyone,” he explained after and the evidence certainly suggests whatever was said struck the perfect tone.

To a man, throughout all units of their team, Watford’s improvement is remarkable. At the back, they have kept as many clean sheets in five games under Pearson as they managed in 15 matches for Gracia and Flores, with Ben Foster’s saves ratio improving from 70 per cent – the fifth worst in the league – to 84 per cent, which can only bettered by Alisson.

In attack, the transformation is even more astonishing. In his first game in charge at Liverpool, Pearson will have seen that his new side could create chances even against the very best. But finish them, they could not. Pre-Pearson, Watford’s shot conversion rate was seven percent -comfortably the lowest in the Premier League – but since the former centre-back took over, the Hornets are scoring from 23 per cent of their attempts on goal. No side, not Liverpool nor Manchester City, can match Watford for ruthlessness over the last month.

Abdoulaye Doucoure and Troy Deeney certainly appear to have bought in to Pearson’s approach. The scorers of their first two goals at the Vitality Stadium were arguably their best players on a day when everyone impressed. Deeney never gave Steve Cook and Simon Francis a moment’s peace and the way he finished his opportunity when Ismailia Sarr set him up in the second half sums up Watford’s new-found oomph.

Pearson has made few complex alterations – Deeney explained the changes as ‘going back to basics’ – but one switch has been to free up Doucoure. The midfielder was employed as a holder by the previous two managers but in the knowledge Doucoure has the energy and mobility required to shuttle between boxes, Pearson has been urging him to burst forward. With Deeney and Doucoure thundering through the middle, Francis and Cook could offer little cover for Adam Smith and Nathan Ake while both full-backs were being tormented on their returns from injury by Gerard Deulofeu and Sarr.

Deulofeu’s talent is unquestioned but crucially Pearson appears to have found a way to motivate the former Barcelona winger. Sarr’s ability was rather less evident before Pearson was appointed, with the £40million record signing struggling to provide one assist while flitting between the pitch and the bench. With a regular run of games under Pearson, the 21-year-old has created four and scored two more.

Having been six points from safety, Watford are now the same distance from the top half. In this fettle, the Hornets could gobble up that ground in similar fashion.