Home Johnny Nic Football’s marriage to gambling: Can we ever go back? 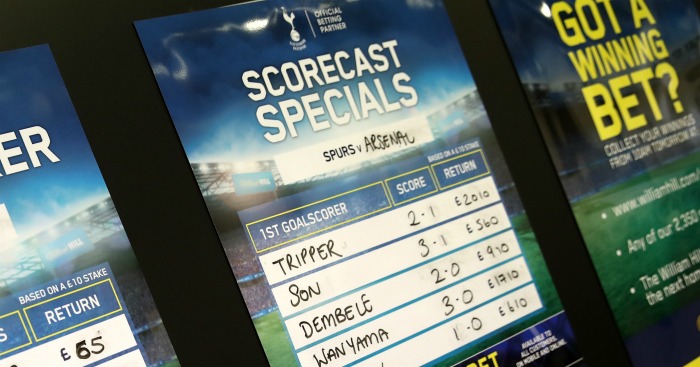 I was in bar with a pal. We sat next to a lad in his early 20s. He was alone and placing bets on the evening game between Birmingham City and Swansea City, which had just started. It’s not an untypical sight today, so we just tuned him out and got on talking about collecting records, which is one of our preferred subjects of conversation.

Maybe 15 minutes later, the lad slammed the phone down on the table, swore, swilled the remainder of his pint down and went to the bar for another. He soon returned, head once again in his phone. Despite Jeff’s advice, the fun had stopped but he clearly hadn’t stopped. At half-time he swore again and then punched the wooden table hard with his right knuckle.

“No luck today, mate?” said my pal, sympathetically. He just shook his head, stood up, said miserably “I am so f**ked. Totally. F**ked” and left.

It was a sad thing to witness. It looked like he’d needed those bets to come in and they hadn’t and now there would be consequences. I felt really sorry for him and it struck me how isolated he was. I thought about him again this weekend.

On Sunday, the ‘5live Investigates’ programme reported on their discovery that 15 football club websites had direct links to gambling websites on pages specifically targeted at children, some via ads tailored to appeal to young people. When challenged, they all removed them immediately and apologised. Presumably they didn’t look at their own websites to see what was on them.

The programme dragged the CEO of the English Football League on to ask how this had happened, as 14 of the 15 clubs were in the Championship and League One. The interview with Shaun Harvey was laughable. He wriggled and squirmed and said how “embarrassing” this was and proffered this gem to prove how seriously they take children’s exposure to gambling. ‘We ensure there’s no advertising in family sections.’ Yes. He really did.

Harvey blithely asserted that “football and gambling has had a healthy partnership for many years.” He didn’t define what was ‘healthy’ or who it was ‘healthy’ for, exactly.

Certainly not healthy for the 30% of kids who Epic Risk Management – The Leading Independent Gambling harm-minimisation Consultancy in the UK & Ireland – discovered have a gambling app on their phone. As reported on their website in 2016, the Gambling Commission estimated that 500,000 children aged 11-15 were gambling every week with 143,000 experiencing gambling-related harm. Given football’s popularity and football betting being by far and away the highest profile and most widely advertised of all gambling choices, many in those numbers will be football-related. So, not healthy for them. Not healthy for the lad next to me in the pub, desperate and alone and, by his own admission, “f**ked”.

The EFL CEO of Denial went on to say that having a bet was part of the matchday lifestyle along with a pie and pint at halftime. And in a way, that was the most sinister comment of all.

It perfectly illustrated how putting a bet on has indeed been so normalised. This is the gambling industry’s greatest achievement. They have turned the ever-present, all-consuming, opportunity to gamble into a non-extreme, non-threatening and desirable thing to do. Losing money is now cool and that is a quite brilliant strategical achievement.

Many, if not most, of us, when we see the ads, can make a rational judgement as to whether we want to gamble or not and whether we can do so responsibly. But children are much less able to and no child can avoid the ads at any time of the day. It’s in front of them all the time – 10% of 11-16 year olds already follow betting companies on social media. Betting companies are advertising to children and they know they are and football’s authorities know it too. And those clubs surely knew this was true on their websites. It is so normal now, it apparently didn’t occur to anyone that this was wrong.

As the 5live show pointed out, until 2007 you couldn’t advertise gambling before the 9pm watershed but BBC research in 2016 found that 95% of British football matches on TV featured at least one gambling commercial during ad breaks. There is zero protection for kids. There is no constraint on the gambling industry’s voracious appetite for recruiting new punters. And as with smoking, getting people into it when young is the best way to hold them close.

In Italy, the government has recently announced that all advertising of gambling-related products and services will be banned from 1st January, while sports clubs will also be prohibited from carrying sponsors from that industry. Of course Italian football is up in arms about it. And rightly claims it is unfair when the rest of Europe isn’t following suit and they will be unable to compete financially. But there are nearly a million people with some form of gambling addiction in Italy, nearly half of whom are unemployed. Is that not more important?

As I wrote a year or more ago, we are all addicted to betting, one way or another, directly or indirectly. How we break that dependency is a huge, multi-faceted issue for adults, but we can’t even begin to think about doing it until we address the fact that the next generation is already inculcated into the normalcy of gambling. This is a pandemic.

The roots of problem gambling don’t just appear out of nowhere, they are often entrenched in childhood experiences. The 5live Investigates programme spoke to the parents of a 24-year-old lad who had killed himself because he was so tortured by his gambling addiction, an addiction he’d been indoctrinated into while still a child at school, gambling his dinner money. That’s the terrible, dark place where all this can lead. I thought back to the lad who I was sitting next to in the bar. Was that his story too? He was about the same age. He was angry, upset, worried and desperate. Gambling had done that to him.

Surely our children deserve better than for us to totally acquiesce to the gambling industry, to let them do what they want, when they want, on any platform the want and the devil take the hindmost? Because that is what is happening right here, right now and football is lying down and letting it happen without a thought to the consequences. It is a hysterical cliche to say “will no-one think of the children?” but, in this instance, we must. Tomorrow’s problems always start today.

GamCare is a registered charity, and the leading national provider of information, advice, support and free treatment for anyone affected by problem gambling.