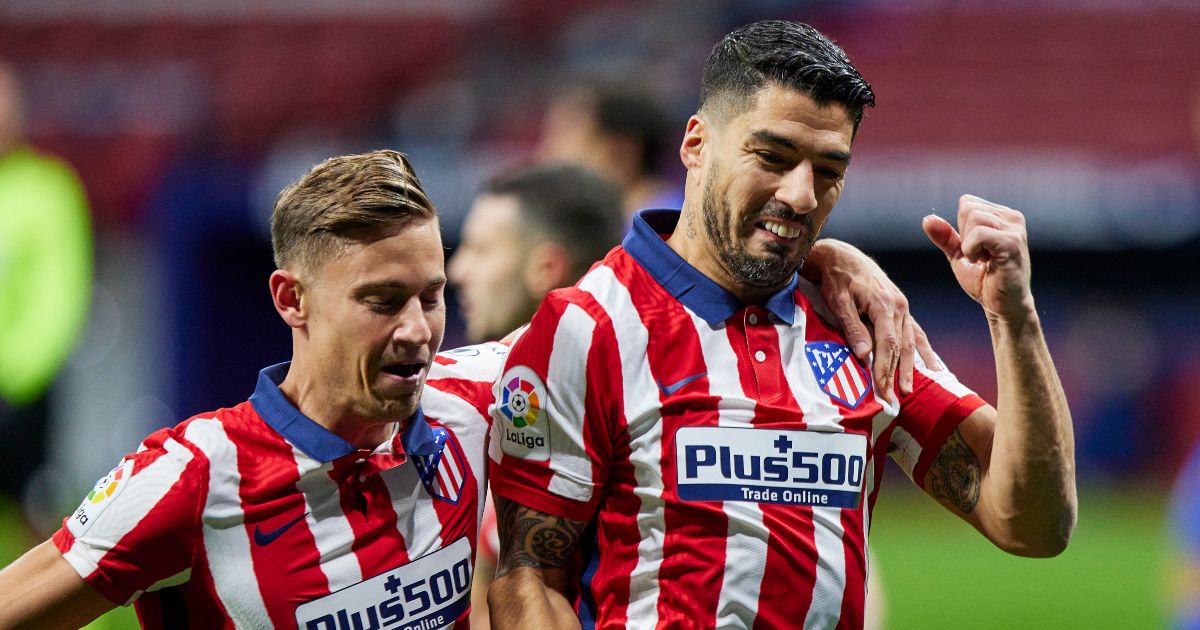 La Liga ended in dramatic fashion on the final weekend, with Atletico Madrid winning their first title since 2013/14. Los Colchoneros did it the hard way, coming from behind against Valladolid to pip arch rivals Real by two points. It was apt that the crucial goal was scored by Luis Suárez, his 21st of a superb season. Now, to the hotly anticipated, unofficial awards.

Player of the Season: Lionel Messi (Barcelona)
Simply the best to ever play in La Liga. The little Argentine normalises brilliance and continues to perform at a ridiculously high level even into his 30s. Almost single-handedly dragged Barcelona back into the title race with some sparkling form after Christmas, scoring 22 goals in 21 games. He will reportedly remain at Barcelona next season and will be joined by close friend Sergio Aguero from Man City.

Young Player of the Season: Alexander Isak (Real Sociedad)
The Swedish striker enjoyed the most prolific season yet of his young career, netting 17 times, a total bettered by only five other players. Spearheading an exciting Real Sociedad side, Isak’s goals helped the Basque side to fifth place. With rumours swirling around the potential departure of Dortmund’s Erling Haaland, Sociedad will wait anxiously to see if the German side trigger the €30m buy-back clause in the Swede’s contract.

Old Player of the Season*: Iago Aspas (Celta Vigo)
Another great season for Aspas, with the Spaniard carrying Celta to the brink of European football, despite narrowly avoiding relegation the season before. Unfortunate not to make Spain’s Euro 2020 squad, likely due to his age, it is a travesty that Aspas is best remembered in England for his inability to take a corner

*Disclaimer: Yes, Messi is the same age as Aspas, but Messi has to share every now and again.

Manager of the Season: Diego Simeone (Atlético Madrid)
A second La Liga title for Simeone, and fully deserved as his side led from start to finish. With captain Koke the only survivor from the 2013/14 success, Simeone has shown his ability to construct another title-winning team. His energy and passion are unrivalled in the managerial world as he kicks every ball and makes every tackle. It is appropriate that he goes down as Atlético’s most decorated manager of all time.

Signing of the Season: Luis Suárez (Atlético Madrid)
Deemed surplus to requirements at Barcelona, Suárez made sure they regretted it by firing Atlético to the title. His 21 strikes were worth their weight in gold as they won his side 21 points. Reportedly costing just €6m, Simeone would likely have paid that much for his winners in the last two weeks against Osasuna and Valladolid.

Worst Signing of the Season: Miralem Pjanic (Barcelona)
Pjanic was signed as part of a convoluted swap deal involving Arthur joining Juventus as Barcelona desperately tried to ease their financial crisis. In truth, to say the transfer has failed spectacularly would be an understatement. While the emergence of Pedri and Ilaix Moriba will please the Barcelona hierarchy, their presence has pushed Pjanic to the fringes. The Bosnian has started just six games all season, the last of which came in February against Elche when he was hauled off at half-time.

Goalkeeper of the Season: Jan Oblak (Atlético Madrid)
Arguably the best goalkeeper in world football and certainly the best in Spain. Accordingly, Oblak won his fifth Zamora Trophy in six years, with a league-high 18 clean sheets this season. The ‘Oblaktopus’ recorded the most saves (103) in La Liga and had the highest save percentage in the division (80%). The crucial penalty save late on against Alavés in March will live long in the memory.

Defender of the Season: Jules Koundé (Sevilla)
Another stellar campaign at the heart of the Sevilla defence from the Frenchman. In fact, his emergence is perhaps the reason Deschamps was comfortable enough to allow Aymeric Laporte to switch his international allegiances to Spain. He played a major part in helping Sevilla record 17 clean sheets and will undoubtedly feature prominently in the transfer rumour columns this summer.

Braids one week, an afro the next, Jules Koundé changes hairstyles but never the standard of his performances. Cold-blooded, able to win the ball cleanly and confident progressing it forward, he’s a unique prospect and he absolutely deserves his place in the French squad. 🇫🇷💃🏽 pic.twitter.com/Dy90BQxQrw

Midfielder of the Season: Casemiro (Real Madrid)
Karim Benzema was the only player to score more goals. Only Benzema and Kroos had more combined goals and assists. Only Benzema and Courtois started more games. These statistics are made more impressive considering Casemiro is a combative defensive midfielder. Possibly the best in his position in world football.

Forward of the Season: Lionel Messi (Barcelona)
A case could be made for Gerard Moreno or Karim Benzema, both outstanding for Villarreal and Real Madrid respectively. Unfortunately, Messi has a stranglehold on this award. Top scorer in La Liga for the fifth year running while also providing nine assists. Per whoscored.com, Messi is the highest rated player not just in Spain but in Europe, at 8.52. He’s a bit good.

Goal of the Season: Kenedy (Granada vs Villarreal)
A stunning strike from Newcastle legend Kenedy, as he leaves two Villarreal players on their backsides before thumping the ball into the top corner past a helpless Sergio Asenjo.

Most Improved Player: Marcos Llorente (Atlético Madrid)
Signed from arch-nemesis Real Madrid for €27m, Llorente was a bit-part player last season and was supposedly primed to replace the Arsenal-bound Thomas Partey. However, Llorente completely reinvented himself as a huge attacking threat. A hugely versatile and energetic player, the Spaniard has been Atlético’s best player on their charge for the title. In fact, only the evergreen Iago Aspas joined Llorente in reaching double figures for goals and assists and a call-up for the Spanish squad for the European Championships is richly deserved.

Breakthrough Player of the Season: Pedri (Barcelona)
Signed from Las Palmas at just 16, Pedri has exceeded all expectations by establishing himself in the first team just a year later. Appearing in 37 of 38 games, the teenager has taken La Liga completely by surprise. His performances have not gone unnoticed by Spain manager Luis Enrique, especially as he has been selected ahead of the more experienced Mikel Merino and Sergio Canales. Alongside Ansu Fati and Frenkie de Jong, Pedri represents the future of Barcelona.

Controversy of the Season: Mouctar Diakhaby (Valencia vs Cádiz)
I could award this to the VAR situation between Sevilla and Real Madrid, where in the 78th minute Sevilla were awarded a penalty for a handball by Militao rather than Real Madrid being awarded one at the other end for Benzema being floored by Bounou. Unfortunately, this has to go to the incident between Mouctar Diakhaby of Valencia and Juan Cala of Cádiz. The match was stopped following an altercation between the pair, with the result being Valencia walking off the pitch amid claims of racist abuse directed at Diakhaby by Cala. Valencia eventually returned, without Diakhaby, after being informed they would have to forfeit the points if they did not return. Cala maintains his innocence, while Valencia stand fully in support of their defender. An investigation by the Spanish football federation remains ongoing.

One-man Team of the Season: Gerard Moreno (Villarreal)
Lionel Messi. Karim Benzema. There ends the list of players involved in more goals this season than Villarreal’s Gerard Moreno. A direct contributor to 51% of his side’s goals, the Spaniard has been sensational in 2020/21. Villarreal’s chances of Europa League success likely rest on his shoulders, and he should prove a pivotal player in Spain’s side for the European Championships too.

Game of the Season: Levante 3-3 Barcelona
A cracking game at the Ciutat de Valencia ended with Barcelona’s title hopes in tatters. The Catalan side threw away 2-0 and 3-2 leads to a Levante side who made a habit out of upsetting La Liga’s elite this season.

Comeback of the Season: Celta Vigo 2-3 Real Betis
Betis actually twice overturned a two-goal deficit, but the recovery at Balaídos on the final day ensured Europa League football for the Andalusians. Aspas and Mendez put Celta in control but Betis recovered thanks to a Borja Iglesias penalty, a wonderful free-kick from Nabil Fekir and Victor Ruiz’s close range tap in. Ten-man Betis had to hang on for 15 minutes too after Tello was sent off but hang on they did to secure an impressive sixth-place finish.

Moment of the Season: Luis Suárez (Atlético Madrid vs Real Valladolid)
As much as I would love to award this to Sevilla goalkeeper Bounou for his last-gasp equaliser against Real Valladolid, it has to go to ‘el Pistolero’. An early goal from Oscar Plano left Atlético with it all to do on the final day. A superb solo equaliser arrived from Ángel Correa early in the second half to restore hope before the Uruguayan struck. An errant pass from substitute Sergi Guardiola sent Suárez through on goal. Suárez did what he has done his entire career and sent the red half of Madrid wild. Not that Marcos Llorente could bear to watch, mind you.

Gareth Southgate Player of the Season: Kieran Trippier (Atlético Madrid)
Gareth Southgate has undoubtedly had many sleepless nights wondering which of his plethora of right-backs to leave at home for the European Championships. Kyle Walker, Reece James, Trent Alexander-Arnold and Aaron Wan-Bissaka are all great options but according to whoscored.com, it is Trippier who has had the best season. It is not an accident that Atlético’s wobbly patch came during his absence for upsetting some bookmakers.