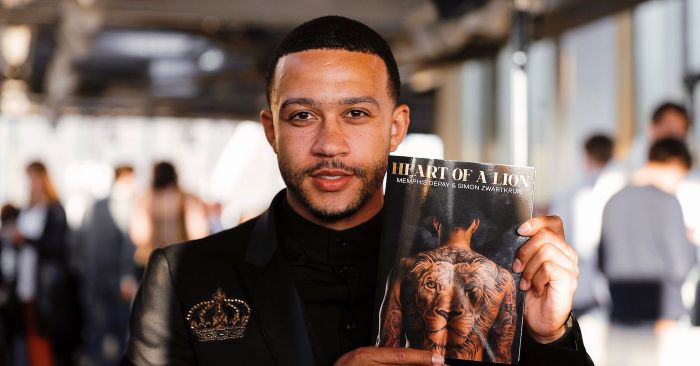 Forget the latest bestsellers or Booker Prize winners! The Football Book Club are the only book club who instead read another footballer’s autobiography every week.

This week, it was the turn of former United winger and Lyon star Memphis Depay’s ‘Heart of a Lion’.

We at The Football Book Club podcast have read a lot of football autobiographies over the last year, from celebrated authors including Jerzy Dudek and Garry Monk. But we’ve never read anything quite as hard to put your finger on as Memphis Depay’s 2019 part-autobiography, part-travelogue, part-tattoo album, part-Paul McKenna self-help book, ‘Heart of a Lion’.

Whichever way you look at it, it’s very different to Andy Gray’s ‘Shades of Gray’, anyway.

So we invited journalist and Manchester United fan Carl Anka on to the podcast to try and dissect Memphis the author but also Memphis the man. Which was surprisingly difficult.

United fans everywhere will remember him for his doomed spell at Old Trafford. But did you know about Memphis the rapper? Did you know he has a Jigglypuff tattooed on his right arm? And did you know the extremely graphic details of his birth?

Well, a few pages into this book, you will, whether you want to or not.

But also, you’ll find genuine insight into Memphis’s difficult upbringing, the low points of his spell at United and a spiritual journey back to his father’s homeland of Ghana.

All of this is while Memphis tries to get baptised in the same river as Jesus and shows off his Rayman tattoo. It’s a bizarre and, sometimes, brilliant read which is half Bible and half Brooklyn Beckham’s photography book.

Should Memphis have waited until later in his career to tell his story? And, fundamentally, should it be illegal for someone born in 1994 to write a book? The answer to both of those questions is, probably, yes.

But we’re very glad he did. Here are the three most important things we learned…

Memphis has achieved a lot in his relatively short footballing career. But being a footballer is just one string to his bow. Memphis also wants to be an artist, a fashion designer, an actor (as long as he can star in a film about his own life, as he genuinely says at one point) and, most importantly, a rapper.

Throughout the book, Memphis drops in various lyrics he’s written when talking about subjects such as heartbreak (No Love), identity (Feelings) and the time he got in trouble for wearing a hat (unnamed hat freestyle).

You can make your minds up for yourselves whether he’s a good rapper or not. Hey, we just read books.

But Memphis, a word of warning: juggling a footballing career and a music career isn’t easy, as fellow rappers Andy Cole, Oleksandr Zinchenko and Gazza have all found out the hard way.

Who's the best (and worst) footballer turned rapper? 🎤 pic.twitter.com/DVylvDhusu

IF LEFT UNSUPERVISED, MEMPHIS WILL SPEND ALL HIS MONEY ON EXPENSIVE KITCHENS

Another unique thing about the book is that it changes perspective almost at will. One second you’re following Memphis’s story, then his mother’s, then that of his youth coach, then back to Memphis. It’s like Gone Girl set in Eindhoven.

Not only does it help form a picture of the real Memphis, it also introduces us to the best character in the book: his mental coach Joost.

Joost is perhaps the most patient man ever, helping a troubled young Memphis channel his efforts into football whilst also warning him against spending all his money on flashy goods.

But it’s not expensive clothes and cars Memphis craves. Young Memphis instead wants to spend his money on a fancy kitchen. He then sulks when Joost drags him along to the Dutch equivalent of a Wickes instead.

NO MATTER HOW MUCH YOU TRY YOU WILL NEVER UNDERSTAND MEMPHIS

If you’re reading the book just for raps and top-of-the-range cookers, you’re in for a surprise. At times in the book, Memphis can be really honest, laying bare his troubled childhood, his struggles with his estranged family and his career low points (United in particular).

Despite all of the shallow moments – the tattoos, the cars – Memphis can also be incredibly deep. He’s exceptionally driven yet also easily led astray. He’s a man of taste, but also he has a painting of the film American Gangster in his living room.

So who is Memphis? I’m not even sure Memphis himself totally knows, as we find out in an often devastating opening chapter where Memphis visits Ghana, birthplace of the father he barely knows.

Overall, it’s hard to be mean about Memphis or the book. While he’s sometimes a bit ridiculous, he’s also thoughtful, well-meaning and admirably ambitious. Much like the book.

And to be honest, that’s not necessarily a bad thing.

OUT NOW! The Football Book Club read Memphis Depay's brilliant/baffling 'Heart Of A Lion' with @TheAthleticUK 's very own @Ankaman616.

And on all other podcast platforms. pic.twitter.com/oNLDfmTkBC

Ridiculous hair on the front cover? No, Memphis is impeccably presented.

Does he talk about himself in the third person? Yes – A LOT.

Does Roy Keane turn up? No.

Did you learn anything meaningful from the book? I have no idea.

Overall – Three and a Half Jigglypuffs Out of Five.

To listen to The Football Book Club podcast discuss Memphis’s book, you can subscribe to the podcast on Apple, Spotify and on all podcast platforms with a new episode every Monday. They can also be found on Twitter, Instagram and Facebook.