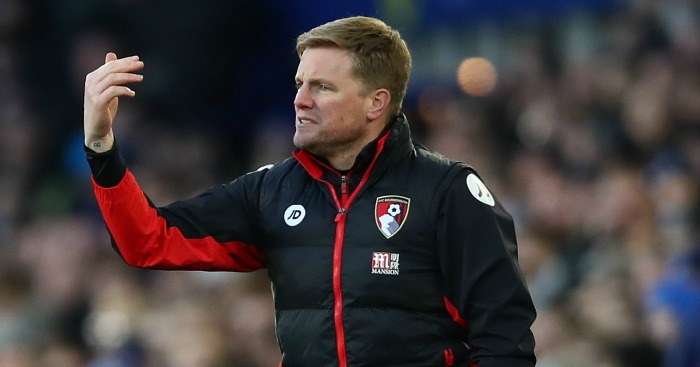 Eddie Howe and Sean Dyche are not natural bedfellows; they are two managers thrust together by circumstance rather than design. They are separated by seven years and manage clubs playing entirely different styles at opposite ends of the country. Howe talks with the smooth demeanour of a young deputy headmaster, while Dyche has the presence of a gruff Midlands bouncer and a voice that makes you check your pockets for a Strepsil.

But later this month, the two longest-serving managers in the Premier League will meet at the stadium one calls home and the other once did. Dyche and Howe were appointed within 17 days of each other in 2012, the former succeeding the latter as the latter returned to his former club. I hope you’re keeping up.

Dyche and Howe have overachieved at the two most surprisingly consolidated Premier League clubs. Turf Moor has its wooden seats, just one anachronism at the club that football’s rampant commercialisation forgot. Meanwhile, this is Dean Court’s fourth consecutive season of top-flight football and the capacity is still only 11,360. The next two smallest stadia in Premier League history – Boundary Park and the County Ground – have not hosted top-flight matches since May 1994.

Finally, and perhaps definingly, the pair are both English. They represent half of the English managers in the Premier League, but even within that quartet there is a split. Neil Warnock and Roy Hodgson are the two oldest current managers in English professional football. They share a nationality with Dyche and Howe, but not a generation. While Warnock and Hodgson fight the tide of time to avoid becoming yesterday’s men, Dyche and Howe have eyes on being tomorrow’s world.

As the size of the pool decreases, the demand to celebrate those swimming in the deep end only increases. Cheerleading English coaches has become an entire subset of the punditry industry, hands wrung and heads shaken as another top-six job goes to a foreign manager (with an excellent CV). Dyche himself has entered the debate: “Sometimes you see foreign managers have one good season in Europe and then get a Premier League job. That happens and I don’t think it happens for many British managers.”

The insinuation of reverse xenophobia feels wide of the mark, not least because there is no such thing as a ‘British (or English) manager’ anymore, other than as an individual description. The sergeant major model of management, preferred by many of the country’s greats, now feels outdated. If the ageing crop are typically known for being dour and defensive, that feels dated too.

Beneath them, there is no great movement of English coaching, no blueprint that all must follow. If the hope is that St George’s Park will be England’s version of Italy’s Coverciano coaching school, the proof will come in the next crop. The only consistency in English management is its inconsistency, a patchwork of fragmented styles without an obvious common ground.

And yet in the case of Howe, there is reason for grievance. When those championing the cases of English managers cry foul, it is usually in defence of Sam Allardyce, Dyche, Alan Pardew or even Gary Rowett. Yet there is good reason to doubt the ability of any of those to transpose their managerial style onto a bigger club. They have flourished specifically because they have been the underdog.

With Howe, it’s a little different. At 40 he is still young, but has over 450 games of experience in all four divisions of English football. If there is a flaw in his management it is the purchasing of players, which fits the head coach/sporting director model that should be the norm for every well-run elite club.

There is also clearly something truly special about Howe’s managerial career – both the ability to improve individual players and to create a team that performs far beyond the level of its component parts. Of the 14 Bournemouth players used on the opening day of this Premier League season, six of them played for the club in League One. It is unprecedented for an English manager to keep the nucleus of a third-tier team in the Premier League and make it work for so long.

Speaking to Simon Francis before the start of last season, Bournemouth’s captain described an eye for detail in his manager that could be compared with Pep Guardiola. It might be a slightly reductive assessment, but if any English manager has a ‘philosophy’, it is him. For want of a better adjective, Howe is the most ‘foreign’ of the English managers currently working in the top two tiers. He’s also the highest-placed.

Maurizio Sarri jumps out as worthy of comparison here. Sarri was given a job at Pescara having taken his badges while working as a banker, before taking Empoli to Serie A and consolidating them in the top flight. Having forged a distinct style, Sarri was appointed by Napoli after they had dropped to fifth in Serie A but reached the Europa League semi-finals. He replaced Rafael Benitez and subsequently flourished.

Marco Silva is an interesting example too, not least due to his naked transparency in using lower-reaching Premier League clubs as stepping stones towards his own promotion. Building a career is not merely about excellent performance but choosing the right moment to make the leap. Timing is everything.

If Howe is different to Dyche, he is the anti-Silva. There are no leaked rumours of interest to further his own ambitions, no talk of jumping ship. Bournemouth’s manager has not just built a team on the south coast, but a dynasty. He is not Eddie Howe but Eddie Howe, Bournemouth manager.

It is difficult to imagine Howe anywhere else, and perhaps that is the issue. There is a thin line between loyal and typecast, and Howe knows only too well how quickly reputations can change. As ludicrous as it might sound, he was criticised after Bournemouth fell to 12th last season. For context, that is the club’s second highest ever league finish.

Howe’s overachievement  must not become normalised. He has taken a club from the literal bottom of the Football League to the top half of the Premier League, albeit with a short sabbatical at Burnley. He has consolidated a League One-sized club in the top flight, and even when allowed to invest the increased revenues on new players has still been out-spent by those around him. Since promotion, Bournemouth have finished above Newcastle, West Ham, Leicester and Southampton. They have beaten Manchester United, Liverpool, Arsenal and Chelsea.

Not every manager wants to shimmy up the career ladder. Having suffered an eventually career-ending injury at the age of 24 and left Burnley to move back down south after the death of his mother, Howe knows only too well that pleasure is far more important than promotion. There is no rulebook which demands that he must aim for the stars or the top six.

But that doesn’t mean he has not earned a promotion. Howe is in a group of one; no other English manager quite matches his achievement and style. You don’t have to be a cheerleader for the English manager brigade to conclude that we have a special talent.

The question might be whether English football remembers to cherish him. For all the glory at the top of the Premier League, Howe’s is the astounding achievement of the last decade.