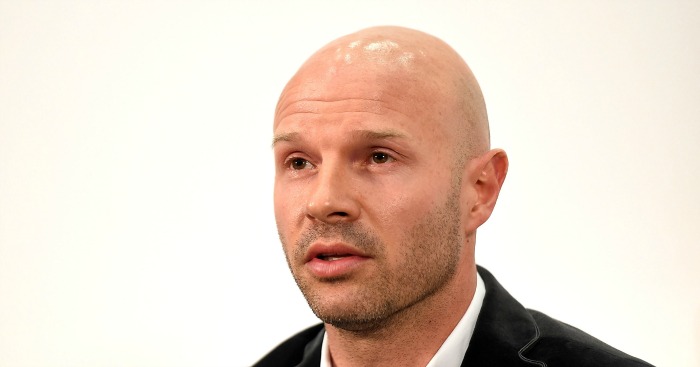 This week John Nicholson is a bit frightened of Danny Mills’ stare and wishes he spoke proper Norwich.

Fashion police
1997 Panini stickers reveal our man Danny is actually ginger! I bet you never knew that. Appears not to have had any hair since about aged 18. Bowling ball head, with sticky-out ears, gives him a distinctive – some cruel boys might even say – almost Nosferatu-like appearance. Actually really suits it. Impossible to imagine him with hair in fact, and it makes him super-distinctive.

Clothes are plain and undemonstrative and deliberately worthy of little comment. Wears the regulation thin, tight wooly pully or cardigan. Probably owns 59 polo shirts. Dark eyes give him a deep, tough stare. Not hard-looking, exactly, more insolent or possibly stroppy. Quite endearing in that regard.

Lingo bingo
Like fellow Norwicher Chris Sutton (okay, he’s an adopted son), he has a habit of beginning almost every response with a short, almost exasperated expulsion of air. This makes it sound like he is almost always in an impatient strop about something, though without reaching the unscalable Olympian heights of the Sutton nark, obviously. Comes over as a man who is actually quite soft, but who is trying to be hard.

Sadly, not a hint of the rising inflective Norfolk accent left in his voice these days. Doesn’t randomly drop the ‘g’ off the end of a word and even pronounces all the correct vowels, unlike his home-town natives. This is all very disappointing, as the Norfolk accent is one of the most entertaining and bizarre of all this fine land’s voices. Repeat after me, Danny. “Hev yew gotta loight, boy?”

Hits and misses
A big miss recently, when he came out with some right old guff about the likes of Robert Pires introducing diving to the English game. It seemed a bit out of character in its thoughtlessness, because Danny is not one of football’s grunts. Fair play for Pires getting on your wick, he was very, very annoying, but the whole foreigner diving thing is a cliche that has just never been true. Was disappointing because normally he can see a cliche coming and swerve out of its way.

Always speaks clearly and without extended prevarication. Can use his tenses and verbs properly like a proper grown-up. Did a good job of dissecting Stuart Pearce’s work at City saying he was poor tactically and motivationally. Clearly fell out with him and not afraid to say so. All good. Volunteered for an FA committee set up to look into the development of English players. Some suggestions were made, and he led the presser to explain them. Articulated it very well. But all of them seem to have been subsequently ignored, of course.

He is well-established on 5live, having been retired for nearly seven years. His contributions to discussions often have a healthy does of passionate cynicism to them, which is enjoyable. Is clearly a fella with deep feelings. This is also good.

Never felt that he toes any default ex-pro lines, which is why the Pires thing came a bit out of the blue. He’s a useful go-to man for in-the-dressing-room insight and has often played with or against many current players. Also gives international insight having played at a World Cup under the lovely Sven.

It feels like he’s stuck between being a Talksport-style shouty old school, ‘in-my-day-you-could-kill-a-man-and-only-get-a-yellow-card-back-when-men-were-men-and-so-were-the-women’ type and being more educated and thoughtful, But it should be clear which way to leap. The ex-player world is full of Little Englanders and poorly informed people whose only stock-in-trade is to say dumb things to get the approval of an audience of other dumb people. You’re better than that, Danny.

Other hits include being runner-up on Celebrity Masterchef to the wonderful Emma Kennedy (listen to her Audible autobiog, if you get the chance). Anyone that can cook a fillet of beef and serve a chocolate fondant is alright by me. I once saw him in Betty’s tea rooms in Harrogate, you know. Yeah, baby. Rock n feckin’ roll.

Big club bias
When you come from Norwich, you tend to be pretty grounded. And it’s still 1957 there, anyway, so, like, now hasn’t even happened.

Loved or loathed
Even leaving the usual Arsenal tribal horribleness over the Pires thing aside, he remains quite a divisive figure. Possibly this is a hangover from the no-nonsense, aggressive way he played the game.

My social media research suggests some genuinely deep vitriol against him, not just as a player and a pundit, but as a man, and that simply doesn’t seem justified. This is an aspect of football culture which I find hard to relate to. These critics don’t even know him, have never met him and yet presume to know him so well, via his football, as to decry him as a person. It’s going too far.

Whilst football may be an expression of one side of yourself, the human character is multi-layered and often contradictory. All of us have our good and bad traits. To dislike someone simply because you didn’t like how he played football, seems unfair. Against this, some commented how articulate he was, and that he seemed like a good bloke. I favour the latter view.

Proper Football Man
Ah hello Mrs Mills, where’s your piano? Ha ha…Mrs Mills…did you hear that, Andy? Andy! Andy, don’t do that to the waitress, there’s a panty-wetter from the Guardian on the next table. It’ll be a monumental carve-up, if you’re not careful.

Okay son, settle down, no need to get a cob on, it was just a joke. Nice passive-aggressive angry staring, though, we like that. I’ll just put a tick in the box next to Looks Like He Can Kick Off At Any Moment. You’ve every right to be angry, having to sit next to Alan Green, you poor sod. Bet he steals all the pies.

We really love this thing what you wrote about foreigners diving, Danny. Was that to earn your PFM spurs? If so, good work. We love nothing better than being pandered to. And you’re quite right. Cheats, them lot. And gay. That’s off the record, mind. You can’t say anything these days, you know how it is. Can’t even call a bin bag black any more.

The thing is though, we’re not happy about you cooking on the TV, are we Deano? Oh, he’s passed out. No. That’s setting a bad example for all of us, Danny. No offence, like. Don’t look at us like that, mate. I don’t have to get Sam down here to give you a slap, do I? Good.

Hmm, what else have you got in your locker? Writing for The Times? Bit posh, that, especially if it’s not ghost written for you by a big idiot of a journo who just copies down everything you say, like a bloody monkey. You write it yourself? Pfft, nah, not ‘avin that. I mean, it’s not like you’re a literary great like what Brucie is. Have you read his books? Brilliant, they are. Full of, like, words. You’d not think an ugly get like him could write, eh? I always wanted to write the Readers Wives bit in them dirty mags. Can’t even spell clitoris me, though. Ha ha…did you hear that, Andy? Andy…I said I can’t even spell…oh he’s taking a sh*t in a plant pot.

Cor you like your charity work, dontcha, Danny – important to have that on your CV when they catch you doing something what any red-blooded man should be doing, but which is illegal now, apparently. Bloody PC Feminazis. But as long as you’ve done summat for the kiddies, they’ll forgive you for doing what you were doing at Koontz in Costessey at 4.27am with Miss Piston Ring and Grease Nipples Body of 1994.

Ah here’s Monkey Boy. Fancy a drink, Danny? Reidy’s got a new concoction. What is it, Reidy? Really? Bloody hell. He’s mixed helium, peyote and Just For Men and it’s got a proper head on it too. Ah well, cheers, everyone. Mmm, lovely that. I can’t even really see anything now. It’s all shadows and rainbows. Beautiful. Put the Grateful Dead on, Macca,

You not drinking, Danny? Hmmm. You’ll not be wanting to wrap TC in pastry and cheese and jam him in a Pizza Hut oven, will you? Poof. Nah, this isn’t going to happen, Danny. No PFM would turn down a chance of a Reidy cocktail and some TC-based high jinks. It’s team bonding, son. One of football’s greatest traditions. If you’re going to be one of us, you need less clever and more stupid, right? Because we all know that stupid is really more clever than clever is. Don’t look at us like that, Mills, your PFM application is going in the shredder, along with one of Dion’s ex’s thongs. Dear me Dion, you might have washed it. Take him away, Merse. Merse! Merse! Stop getting distracted by butterflies, son.

Beyond the lighted stage
A lot of tough, incredibly committed charity work. Has worked for Shine, who used to be the Association for Spina Bifida and Hydrocephalus, after sadly losing his own lad as a stillborn. To raise money for them, he has done the Brighton Marathon in a wheelchair, as you do, and did it in two hours, 42 minutes! Bloody hell, Danny, you could’ve just taken it easy. Rowed the channel to raise awareness of melanoma, after the Leeds United fitness coach had died of it, at just 32. Bless him. I mean, this is selfless stuff and all of which just seems above and beyond the call of duty. Seems the ex-player most likely to do something in a bath of baked beans for a good cause.

Look, for the record, to me, he seems an absolutely solid fella with a big heart and soul.