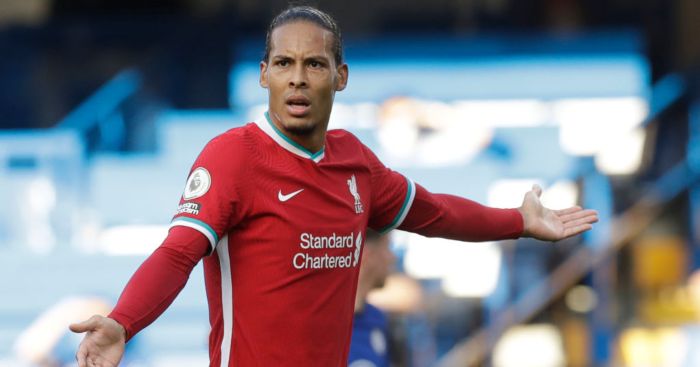 The injury Virgil van Dijk sustained against Everton may be “perhaps worse than initially feared”.

Van Dijk seems likely to be sidelined for the rest of the season as he will undergo surgery on the anterior cruciate ligament in his right knee that was damaged in a tackle with Jordan Pickford.

Some reports have suggested the centre-half could return towards the end of the campaign with neither he nor Liverpool putting a timescale on his recovery.

Jurgen Klopp will “wait like a good wife when their husband is in jail” but The Athletic journalist David Ornstein believes that may be further away than has been claimed.

“It’s my understanding – and I stress, that’s just my information, it’s not official – that the damage to Virgil van Dijk’s right knee is perhaps worse than initially feared and extends beyond the ACL,” he told the Tifo Football podcast.

“I’m no medical expert so it’s unfair to speculate further or give greater detail. But I did want to pass it on and it would indicate that we won’t see Van Dijk back on a pitch until next season.

“He will now undergo surgery – exactly when we don’t know, that’s a decision for Van Dijk and those around him. But through Liverpool and the Dutch national team they’ll have access to some of the best medics in the world, plenty of options, and I’m sure he’s in perfectly good hands.”

Orstein also discussed the likelihood of Liverpool signing a replacement in January, like Kalidou Koulibaly.

“The big question is how Liverpool react, with many eyes already on the January transfer window. As far as I know, that level of conversation is yet to take place internally,” he said.

“They won’t make a snap call on the matter. They’re not ruling out a January signing but as things stand I don’t sense it’s likely. January is always a tricky market: prices are high; availability low.

“We don’t know what finances Liverpool would have at their disposal. A player coming in would need time to adapt. They also wouldn’t just have to be at Liverpool’s level, they need to be an improvement on what the club already have.

“Liverpool aren’t normally a chequebook club in this case. They don’t tend to throw money at these sorts of problems. Yes, they signed Van Dijk himself and Alisson for big money, but we’d all agree that they were needed and it was money extremely well spent.

“From what I hear, Jurgen Klopp would prefer to rely on internal resources in this case.”