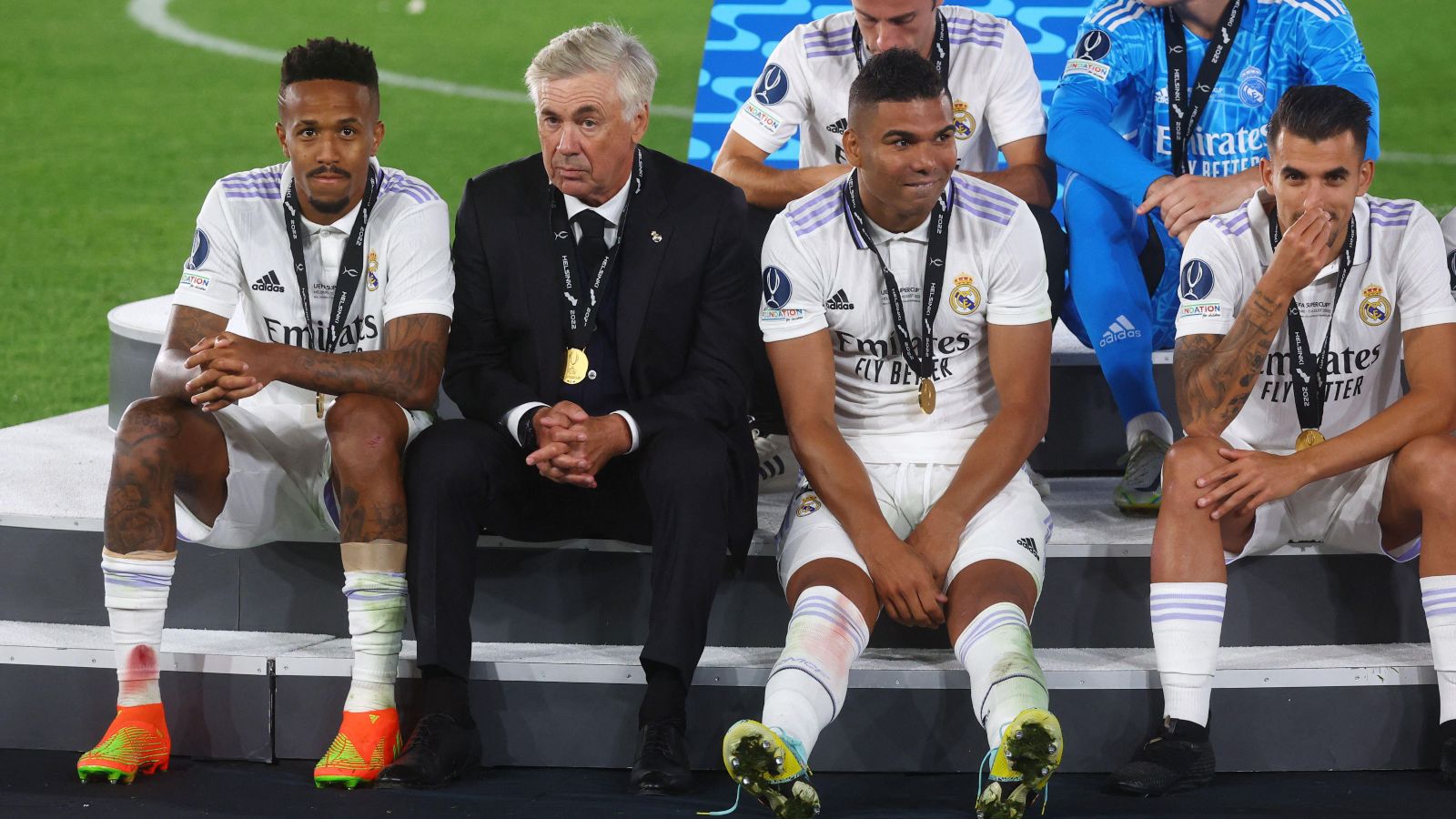 Carlo Ancelotti has confirmed Casemiro “has decided to leave” Real Madrid amid negotiations with Premier League side Man Utd.

The Red Devils are prepared to pay €70m to take the Brazilian to Old Trafford this summer with Casemiro agreeing a four-year deal plus the option of a further year.

Reports have claimed that Casemiro is set to have a medical in the next 48 hours as Man Utd look set to seal their fourth signing of the summer after bringing Christian Eriksen, Lisandro Martinez and Tyrell Malacia to the club.

And Real Madrid boss Ancelotti has now confirmed that Casemiro is set to leave the club and will not play for Los Blancos on Sunday.

Ancelotti told reporters: “I have spoken with Casemiro. He wants to try a new challenge. We understand his decision. Negotiations are ongoing but he has decided to leave Real Madrid.

“Casemiro will not play on Saturday. Replacement? We have signed Tchouameni and he’s one of the best on the market. Then we have Kroos and Camavinga.

“Yesterday I realised it was a real thing [Casemiro to Man Utd]. My plans won’t change.”

Casemiro trained today with the rest of his Real Madrid team-mates potentially for the final time as negotiations with Man Utd continue.

The Metro are reporting that he will definitely miss Monday’s match against Liverpool as Man Utd ‘missed the midday deadline’ to register him for the fixture ahead of the weekend’s Premier League matches.

Man Utd have been criticised for the transfer business over the summer with their actions showing a lack of planning.

And former Liverpool defender thinks Man Utd are becoming a “joke” under the ownership of the Glazers and the club needs “meaningful change at the top”.

Carragher wrote in his Daily Telegraph column: “As detailed by the respected financial analyst Swiss Ramble this week, United are the only Premier League club to pay dividends to their shareholders. Since 2016 they have paid out an average of £22 million per year.

“As Swiss Ramble writes: ‘In the last 10 years, no owners in the Premier League have taken out more money than the Glazers have done at United.’

“It is obvious that the Glazers do not care. Their friends in America must look at them and think ‘wow, what a great business you have there.’ To those people, United must be regarded as little more than a sports club, somewhere over in England, from which the Glazers take millions every year.

“I was playing for Liverpool when the supporters did so much to force Tom Hicks and George Gillett out of the club. The fans were relentless and it made a genuine difference. United fans are now planning more protests against the Glazers on Monday, and that is no surprise to me.

“But all of these clouds over the club do not make it acceptable for United to lose the first two games of the season in the manner they have done. When we were playing under Hicks and Gillett at Liverpool, I hated it when players used the ownership as an excuse for defeats.

“When I was in that situation I was trying to fight against the negativity in the dressing room, but over a longer period of time I couldn’t do it, and I was naive to think that I could.

“Is it clear that this mess — which starts from above and seeps through the entire club — is not helping anyone. United’s actions this summer are evidence of a club in turmoil and an executive team without a discernible plan in the transfer market.

“The club is turning into a joke, and without meaningful change at the top it is hard to envisage any significant long-term improvements on the pitch.”