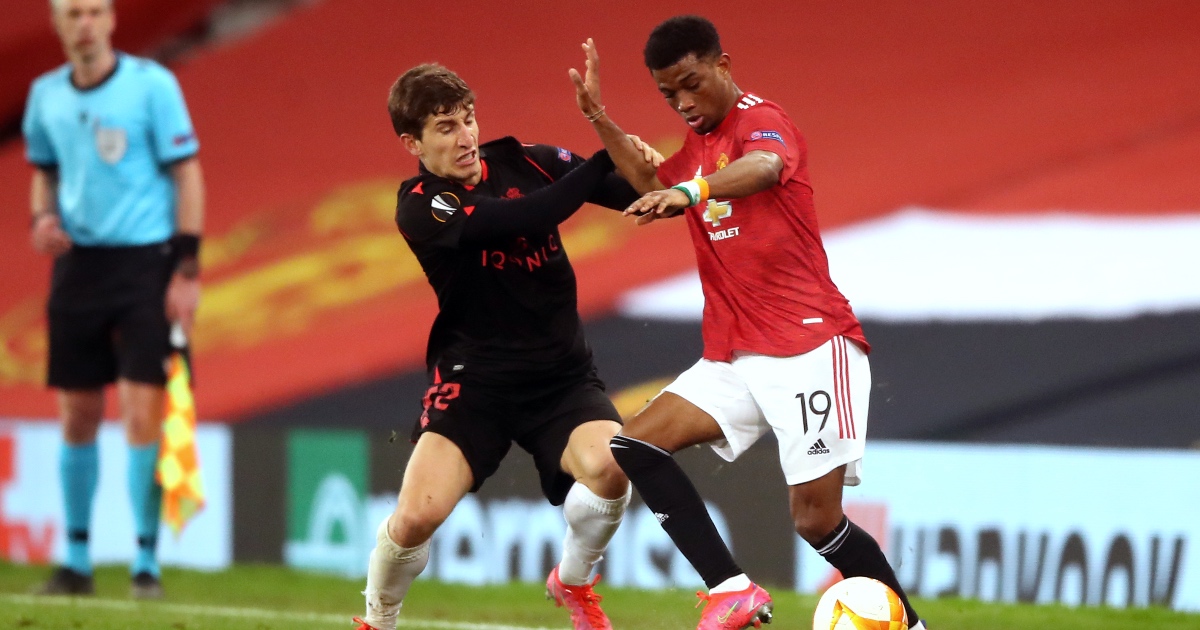 This round of 32 tie was all but settled when the Red Devils scored four away goals without reply in Turin last week, yet the Norwegian still named a surprisingly strong side for the return fixture.

Solskjaer had hoped to build momentum and confidence in the second leg at Old Trafford but had to make do with a 0-0 draw and slice of history when introducing teenager Shoretire as they saw out a 4-0 aggregate triumph.

It was a memorable moment towards the end of a largely forgettable clash, with Sociedad skipper Mikel Oyarzabal missing a penalty in the early stages of a first half in which Bruno Fernandes hit the crossbar.

Modibo Sagnan hit the woodwork shortly after half-time and substitute Axel Tuanzebe saw a headed goal ruled out due to a Victor Lindelof foul in the build-up.

But with the tie settled, Solskjaer turned to his highly-rated teenagers as January signing Amad Diallo replaced injured Daniel James before Shoretire came for his record-breaking appearance.

United were always going to be in Friday’s last-16 draw given the first leg result against Sociedad, for whom Manchester City great David Silva was conspicuous by his absence.

The veteran was among five alterations made by coach Imanol Alguacil, who knew their minuscule chances of progressing would only be possible by unsettling the hosts with an early opener.

James gifted them the chance to do just that, with referee Lawrence Visser pointing to the spot after the Welsh winger clattered into Andoni Gorosabel when collecting a pass from United academy graduate Adnan Januzaj.

Oyarzabal stepped up to the spot but the Sociedad skipper sent it into the Stretford End in the 13th minute.

The Spain international would have quickly made amends was it not for Lindelof, who superbly cut out the winger’s cross with Alexander Isak ready to pounce at the far post.

Solskjaer’s sluggish side only belatedly settled midway through the first half, when Anthony Martial forced a smart save out of Alejandro Remiro at his near post.

The Sociedad goalkeeper was dragged out of position by Fred when the hosts next attacked, with the midfielder’s unorthodox cutback met on the edge of the box by a first-time Fernandes shot that rattled the bar.

The Portuguese turned creator when clipping a lovely ball over for diminutive James to get away a header that Remiro just clawed away towards the end of a forgettable first half.

Tuanzebe, who was deployed as a defensive midfielder, Brandon Williams and Marcus Rashford came on at the break, with the latter going close to finding the breakthrough within three minutes of his introduction.

On the five-year anniversary of his first-team debut, Rashford wrong-footed Remiro with a dipping 30-yard free-kick that bounced just wide of the foot of the post.

United might be able to threaten from set pieces but they are often found wanting when defending them, with Sagnan seeing a header hit the bar when a free-kick caused problems soon after.

Mason Greenwood saw a low shot from the edge of the box pushed wide and then sent a low snapshot into the side netting before Diallo replaced injured James in the 59th minute.

United found the back of the net four minutes later when substitute Tuanzebe soared to power home Alex Telles’ corner but their joy was shortlived.

The video assistant referee advised referee Visser to review the flying knee from Lindelof that caught Jon Bautista as the ball came in, leading the goal to be chalked off and the United defender to be booked.

Martial went close and Dean Henderson denied Martin Merquelanz as the match petered out, but Shoretire’s historic introduction in place of Greenwood in the 76th minute made for a memorable ending.