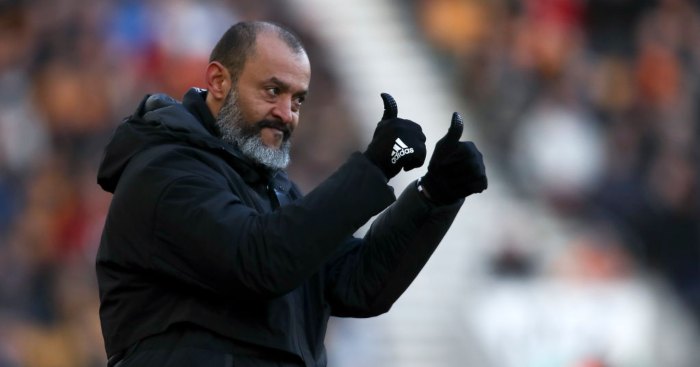 Up until this past weekend, Wolves looked threadbare. Having sold Helder Costa to Leeds, Matt Doherty to Spurs and loaned Morgan Gibbs-White to Swansea, they were left with just 19 players in their first-team squad. But we needn’t have worried: this is what Wolves do, right?

Nuno Espirito Santo, the players, the club and the man behind them all, Jorge Mendes, all keep their cards hidden and incredibly close. We don’t hear of ‘talks’, of ‘ongoing discussions’ or transfer tos and fros: deals are just completed, with no indication of prior interest or warning.

They operate in a closed loop. There is no benefit to the club or the agent so tightly associated with them to leak information to the press or make negotiations public – discussions take place in house, under wraps.

Fabio Silva is the latest young Portuguese talent to be packed up and shipped to Molineux by Mendes, with Wolves stumping up £35million for his services.

It’s an extraordinary amount of money for an 18-year-old who has scored just three goals in under 1,000 minutes of senior football. But those in the know in Portugal describe him as a “generational talent”. His release clause, before Porto dropped it due to coronavirus-affected financial constraints, was £111million. Wolves could have a hell of a player, thanks again to Mendes.

He’s supposedly a “dribbling Olivier Giroud”. Which we assume is a reference to his proficiency to travel with the ball at his feet rather than a salivary defect. If that is the case then Wolves have essentially bought the perfect back-up for Raul Jimenez.

He will, of course, have a hard time in displacing the Mexican – who is just about the best around at the moment. But he started a ludicrous 51 games last season, and although that number will be reduced owing to Wolves’ absence from the Europa League, an injury would have left them without a striking option that they now do have in Silva.

Nuno likes a thin squad; it’s worked for him thus far. The whole setup is very tightly knit. Celebrations of a goal on the pitch are mimicked off it, as the coaching staff embrace in a group hug. They only illustrate a point borne out through interviews with players and staff who attest to the collaborative, family-like feel Nuno has instilled. Maintaining that unity is easier when you have few to choose from, and becomes more difficult when there are a number of players sidelined who feel they deserve a place in the team.

But Frank Lampard’s problems will never be Nuno’s. The Portuguese boss is desperate to avoid selection headaches and squad discord at a cost to seemingly any other problems a limited playing staff creates.

With the addition of Brazilian Marcal from Lyon, Nuno has 21 players in his first-team squad, with at least four of those featuring so rarely that they should really be considered fluff rather than genuine contenders for game time. But it’s a policy that has worked for him, so why change it?

The Mendes-Wolves partnership/dictatorship/relationship/whatever you want to call it has so far been incredibly beneficial to all involved, and continues to bear fruit. And there is no particular reason – other than the assumption that agents are a scourge on the lifeblood of football – that Mendes won’t continue to do good work for Wolves.

But his influence remains uncomfortable. Fosun International, the club’s owners, maintain that Mendes’ role is advisory, but their stake in his company, along with his many Wolves clients – including Nuno himself – means club and agent are so interwoven as to almost be as one.

Should, for example, Nuno be sacked, what is the knock-on effect? Could the relationship between owners and agent-cum-chief-scout be soured enough for Mendes to up and leave? Not only would Wolves lose their primary method of sourcing new players, but Mendes could quickly line his own pockets through big deals for current players from European giants, who he – as it stands – keeps at bay.

Wolves will probably improve again this season; they’re not a side accustomed to standing still. But Nuno remains the enigma, in terms of the way he builds his squad and in his key role in a finely balanced, unique bond between club and super agent. There is no manager like him; he’s irreplaceable. Without him, they could drop like a stone.