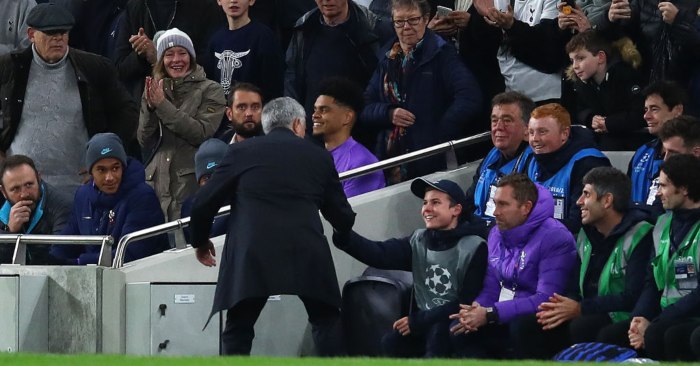 Mr Humble
‘He really is the Humble One! Jose Mourinho apologises to Eric Dier after substituting him in the 29th minute as Tottenham come back from 2-0 down to claim Champions League win’ is quite the (long) headline on MailOnline.

Quite why making a very public point – it was the first thing he said on BT Sport – of making it clear that he has apologised to a man makes him ‘humble’ is not made clear. But why would anybody hesitate to use this tiresome trope?

‘Jose Mourinho took time out after his Tottenham side pulled off a sublime comeback against Olympiacos, to make clear he had apologised to Eric Dier for substituting him after just 29 minutes.’

He ‘took time out’ to conduct a TV interview he was contractually obliged to conduct, and immediately drew attention to his own loveliness.

He really is the Humble One!

Humble pie
Over to the BBC football homepage, where the main headline on Wednesday morning is ‘The Humble One – Mourinho’s new persona in evidence in Tottenham comeback’.

The headline directly below? ”I was a brilliant ball boy and so was this kid’ – Mourinho finds an unlikely hero’, which is exactly the kind of thing a humble person says.

But let’s return to that headline piece by Phil McNulty in which we will presumably be given evidence of ‘Mourinho’s new persona’.

‘And the night was summed up by Mourinho’s reaction to Harry Kane’s equaliser, created by Lucas Moura after Serge Aurier’s quick throw-in caught Olympiakos off guard – pointing towards an alert ball boy in elation before hugging the youngster for what the new Spurs manager regarded as a full-on assist because of his quick-fire actions.

‘It was a nice moment of headline-grabbing connection between Mourinho and his new club’s supporters, a clever piece of stage management by someone who knows all those tricks.’

After all, what’s more ‘humble’ than a ‘clever piece of stage management’?

A load of new Arse
It’s been widely reported that Arsenal will have nothing to spend in January, but that would never stop The Sun from speculating about ‘a January overhaul should they replace Unai Emery with Wolves boss Nuno Espirito Santo’. Because of course the first thing Arsenal would do on replacing Emery is give his replacement a metric f***-tonne of money to spend on Wolves players and people from Portugal, because those are definitely the only people he knows.

So Santo would of course sign Willy Boly and Ruben Neves from Wolves – who would of course generously allow them to leave for barely any money at all mid-season – and Bruno Fernandes, ‘with the playmaker believed to be ready to leave Sporting Lisbon’ despite signing a new contract literally yesterday. We know he has signed a new contract because The Sun themselves report ‘Man Utd and Tottenham in transfer blow as Bruno Fernandes signs new deal and release clause goes up to £85m’ almost as though this link with Arsenal is absolute bollocks.

So that new contract puts his buy-out clause at £85m and Arsenal would definitely pay that. If indeed there is anything left in the kitty after Wolves have asked for £150m for Boly and Neves.

Yep, this is ‘how Arsenal could line up under Nuno Espirito Santo’. With particular emphasis on the ‘could’.

The Daily Express website go even further with their ‘How Arsenal could line up with five signings under Nuno Espirito Santo if Unai Emery axed’ prediction, because of course Wolves would just wave goodbye to their coach and half their outfield players with nary a question.

‘Unless there was an agreement in place, Nuno would surely return to Wolves to try and bolster his squad.

‘With the Black Country club sitting fifth in the Premier League, it is clear that there are several players that would start for the Gunners.’

Indeed. Because that’s exactly how this sh*t works. A new coach would not be brought in to make the under-performing players better, but would just be allowed to bring in all his old players. Or at least half of them.

‘Playing with a more conventional 4-4-2, Diogo Jota could come in on the left flank with roadrunner Adama Traore on the right.’

‘Pissed off’
We need to talk about quote marks. They really do need to denote quotes. Not even necessarily from a person, but from somebody or something.

So when the Daily Star website’s top sodding story on Wednesday morning is headlined ‘Dead man walking? Arsenal staff are ‘stunned’ embattled Emery is still in a job – but insiders reckon Spaniard won’t be in charge for much longer’ – then we expect to see somebody using the word ‘stunned’. Are we being naive? Do they now mean absolutely nothing? Does anybody else give a sh*t? Are we just projecting annoyance about the perpetually sniffing man in the office?

Clarification bizarrely missing from that headline: He lost his voice.

Amping it up
From The Sun on Chelsea’s Ethan Ampadu:

‘Ampadu, 19, had a slow start to his German stint – but has now made three appearances in the last month.’

Pesky fact: He has actually played just 66 minutes of football and remained on the bench throughout Saturday’s 4-1 win over FC Koln.

Old man, look at my life…
Talking of Chelsea, Mediawatch is amused by The Sun’s Andrew Dillon claiming that Tammy Abraham ‘admitted he has been spying on the best in the business’.

Table dancing
Mediawatch is not quite sure how we ended up in a situation where ‘Everton face a fight with West Ham for David Moyes’ but we had to laugh at this line from Darren Lewis and David Maddock in the Daily Mirror:

‘Everton, fancied at the start of the season to break into the top six, are just four points above the drop zone.’

Which, as an aside, is exactly why Marco Silva and Manuel Pellegrini are still in jobs; the table at least gives the illusion that all is not lost.

Propaganda
‘Man United will give debuts to three new academy graduates and whether or not they make it is immaterial’ – Samuel Luckhurst, Manchester Evening News.

Jack Pitt-Brooke on an improved Tottenham