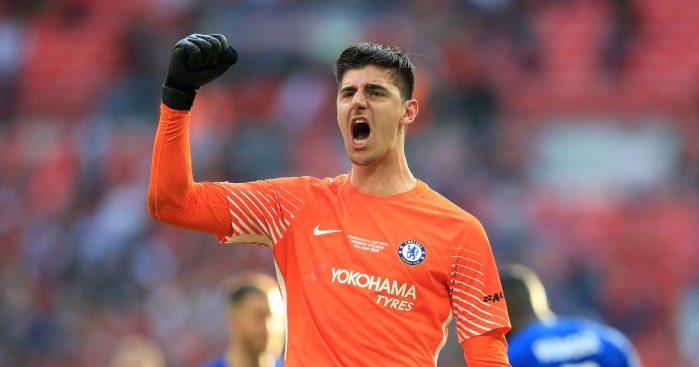 Thibaut Courtois is getting his dream move to Real Madrid in a deal that will see Mateo Kovacic head to Chelsea on a season-long loan.

After months of speculation surrounding the Belgium goalkeeper, the 26-year-old has got wish to swap Stamford Bridge for the Bernabeu.

Courtois only had a year left on his deal and has been absent from training this week as he looked to push through a move before the transfer window ended for Chelsea on Thursday.

The imminent world-record deal for Athletic Bilbao goalkeeper Kepa Arrizabalaga has paved the way for his exit, allowing him to move for a reported £35million as Croatia midfielder Kovacic heads the other way.

A statement from Chelsea read: “Chelsea and Real Madrid have tonight agreed terms for the permanent transfer of Thibaut Courtois subject to the agreement of personal terms and passing a medical.

“Subject to the completion of the deal Mateo Kovacic will join the Blues on a season-long loan.”

Real Madrid have confirmed that Courtois will undergo a medical on Thursday morning, before signing a six-year deal and being presented at 1pm local time.

Kovacic will join Chelsea on loan until June 30, 2019 as part of the deal, with the Croatia international spending a season away from the club he joined from Inter Milan in 2015.

Despite that impressive signing, Maurizio Sarri’s main acquisition before the deadline is set to be Kepa.

Athletic confirmed on Wednesday that the 23-year-old’s release clause of 80million euros (£71m) was activated and his contract terminated, although made no mention of Chelsea.

The fee is a world record for a goalkeeper, surpassing the £65m paid by Liverpool to Roma for Brazil goalkeeper Alisson Becker last month.

A statement on Athletic’s official website read: “On Wednesday, August 8, 2018 at 1202 hours (CET), the Professional Football League confirmed to us that the player, Kepa Arrizabalaga, has met the requirements for the valid unilateral termination of the work contract that linked him to Athletic Club.

“The amount of the compensation established in the contract has been deposited.

“Athletic thanks the player for his contribution during the time he has remained in our club.”

Chelsea open their Premier League campaign at Huddersfield on Saturday, having suffered a 2-0 defeat to Manchester City in the Community Shield last weekend.

Napoli midfielder Jorginho made his debut in the Wembley defeat, while former England goalkeeper Robert Green is the only other notable first-team signing so far this summer.