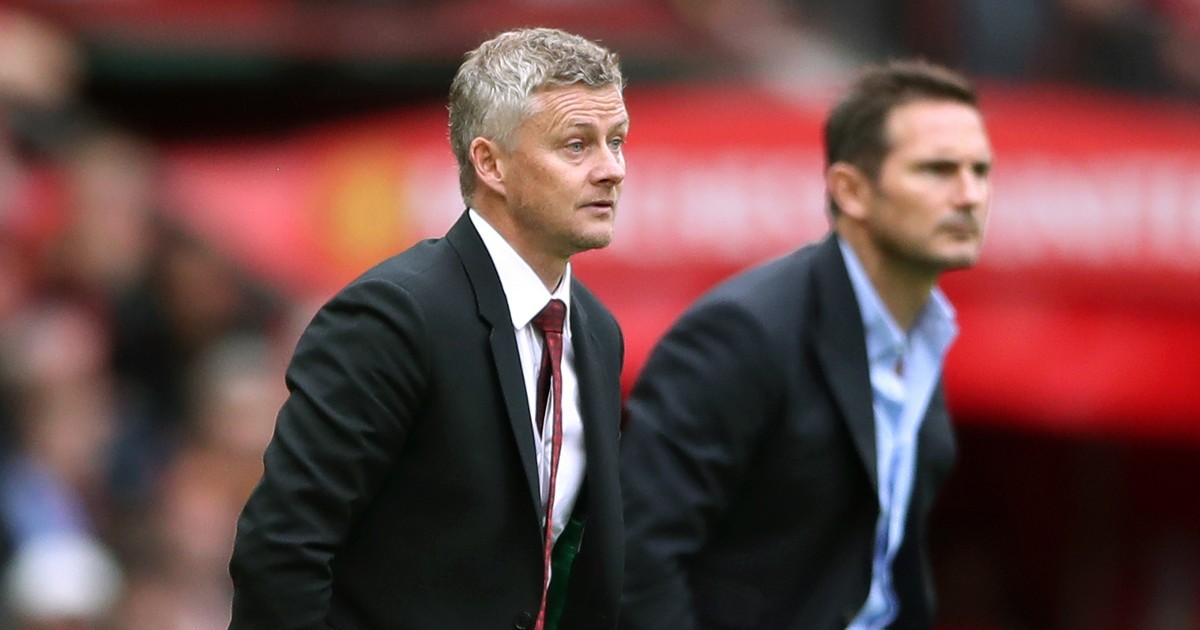 Ole Gunnar Solskjaer and Frank Lampard both took dream jobs for which they were not qualified. It will be intriguing to see where they go now.

I have many a fond memory of watching CD:UK when I was younger. There was an unmissable episode where East 17 were reforming, possibly for the first time. Cat Deeley was finding out what ‘the lads’ had been doing since they had broken up and I remember the first couple – Brian Harvey must have been one – talking about what tenuous showbusiness antics they had been up to since they had caused that national heartbreak. Then they came to the next member of the group.

I think Cat thought he was joking at first, but there was no joke here. He had gone from being in a famous pop group to a career as a roofer.

I find myself chuckling about that moment every now and again. Nothing against the noble trade of roofing of course, but it was just such an unexpected answer. And I thought about it again last week when Ole Gunnar Solskjaer joined fellow Premier League playing legend Frank Lampard on the managerial scrapheap.

Premier League managers are, of course, paid far too handsomely in success and failure to have to contemplate a career like the majority of us but it will be genuinely fascinating to see what the next steps are for Solskjaer and Lampard.

Football management is almost unique in that people will be given extremely highly-paid jobs that they absolutely do not have the qualifications to justify. In all industries, there are examples of some people being over-promoted and others seemingly unfairly overlooked despite appearing to have better credentials for a specific role. But football management takes this to extremes and Solskjaer and Lampard have both been recent beneficiaries of entirely illogical career advancement.

Depending on your loyalty, it may seem unfair to plump both together, but the parallels are obvious. Both Solskjaer and Lampard earned themselves legendary status as players of Manchester United and Chelsea respectively. Neither were given top jobs immediately, Solskjaer having Cardiff in his Molde sandwich, while Lampard was afforded an opportunity at Derby when they used to start seasons on zero points and spend money they clearly didn’t have.

The success of both prior to their big moves was disputable depending on your allegiance. Solskjaer clearly struggled at Cardiff but restored his reputation to some extent with the success he had in his second spell at Molde. Lampard only had one season at Derby, where detractors will say he failed in not getting promoted with a team containing Mason Mount, Fikayo Tomori and Harry Wilson, while his friends and family members will insist reaching the play-offs was exceeding expectations.

Whatever your position on both, it would be difficult to disagree that they were extremely fortuitous in the way they landed their dream jobs. Solskjaer ended up getting the full-time Manchester United post almost entirely by accident, his ability to not be Jose Mourinho lasting long enough to persuade the great football mind that is Ed Woodward to make him the permanent manager. Lampard also followed a joyless coach in Maurizio Sarri, benefitting from the fact that Chelsea needed a seat warmer to kill a campaign during their transfer ban.

So there they both suddenly were: two managers with limited experience and some vaguely successful managerial achievements in charge of two of the most high-profile clubs in Europe. Roles like that, of course, also command a salary that neither would have received anything like before. Solskjaer was reportedly being paid £7.5m a year when he was sacked by Manchester United; Lampard was having to get by on a paltry £4m. Again, only in football would two people with almost no justifiable credentials or any other competitors willing to pay even close to a comparable salary end up in such a situation.

But the fact that both had ended up in such an inflated position now poses the all-important question: where do they go from here?

Realistically, neither are going to get a job at a club at the level of Manchester United and Chelsea again for a long time. Indeed, hearing that Lampard is ‘interested in the Leicester job’ seems incredibly fanciful at this point.

The transferable skills that both have acquired in positions at elite clubs for their next roles are questionable. The main successes of Solskjaer’s reign at Old Trafford are the acquisition of players for £40m and over and in embracing a culture that he was already familiar with from his playing days. For Lampard, the main credit he banked was for starting to use the Chelsea academy that had previously been neglected. Unfortunately, the success of Thomas Tuchel has highlighted how, in reality, he was hugely underachieving with the extremely talented squad at his disposal.

Both, therefore, will have to set their sights considerably lower if they don’t want to become high-profile Alan Curbishleys. With his friends in the media, Lampard seems to have the better PR and it was encouraging to see him challenge Dean Smith for the Norwich role. Hopefully, the fact he ‘pulled out’ of the running for that role was similar to me withdrawing my proposal to Jessica Alba.

His contacts in the game do make him appealing for a club at the upper end of the Championship, who will have seen the types of players he managed to bring to Derby and hope that he would be able to get another club over the line. You also just have to see the extra interest in Aston Villa and Crystal Palace now that Steven Gerrard and Patrick have taken over to see the appeal of hiring someone with Lampard’s reputation.

For Solskjaer, the next step is far harder to predict. Unfortunately, while Manchester United fans may have enjoyed the respect he showed to Sir Alex Ferguson’s parking space and the emotional exit interview, there have been a number of factors which have damaged his reputation as a prospective manager of another English club.

It must be hoped that the media in other European countries that do not scrutinise Manchester United in such detail look at how he has progressed the club’s Premier League finishes and dealt with adversity with an impossibly positive outlook. It may be that a mid-table European team will give a former Red Devils manager a chance that an English club wouldn’t at this time. It worked so well for Real Sociedad, after all.

Whatever the future holds for Solskjaer and Lampard, it is clear that they need to almost start again in their managerial careers. If most of us lost our job, we would try and get a role with a similar starting salary to the one we left. Clearly, if Solskjaer and Lampard hold out for that, they would essentially be retiring now. For both, this next step will be the most important for their long-term career. It will be fascinating to see who takes a chance on them.