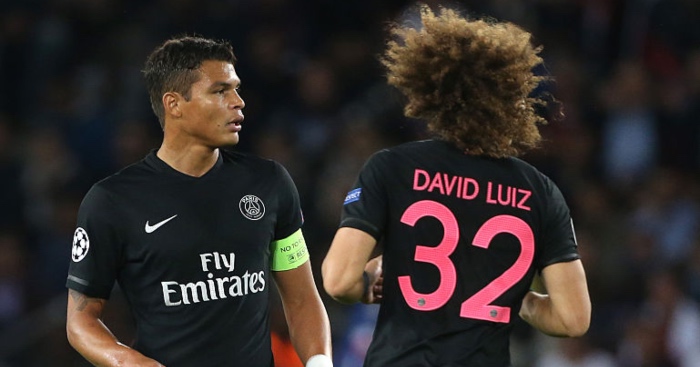 It’s a thing now – clubs being ‘offered the chance’ to sign players. Thiago Silva’s agent is the latest to get his little black book of club numbers out, and Chelsea appear to have taken the bait as they attempt to fill a gap in their squad made through their own lack of foresight.

The Athletic reported on Friday that Chelsea are in ‘advanced talks’ with Thiago Silva over a free transfer – a move they describe as a ‘surprising solution to their need for centre-back reinforcement’. On the surface, it does seem odd: A soon to be 36-year-old with not insignificant wages, who has never played in the Premier League and is unlikely to feature much as Frank Lampard continues to promote youth and look to the future. But he offers something Chelsea are severely lacking; something they had until David Luiz was allowed to join Arsenal last summer – a move Frank Lampard should now be regretting.

Kieran Tierney, in an interview on the Open Goal Podcast, spoke of the importance of Luiz to Arsenal, illustrating exactly what Chelsea are now missing.

“He is a winner, a born winner.” Tierney said. “He was saying to me during the season when we were doing bad ‘we are going to win silverware this season, believe me.'”

Tierney is right, and so was Luiz. Before joining Arsenal last summer, Luiz spent seven seasons in two spells at Chelsea, winning the Premier League, the Champions League, two FA Cups and two Europa League titles; adding a further FA Cup winners medal having made the switch to Arsenal. He’s a winner that was allowed to leave a perennially winning team now very short of exactly those sorts of players.

Mikel Arteta and Arsenal were ridiculed for offering Luiz a new contract just days after his 27 minutes of madness against Manchester City, but he wasn’t fit for that game and his performances since then have more than merited the deal. But above what he does on the pitch is the role he plays off it.

“He is a legend, the biggest legend ever and I love him. He is so good with all the young boys, everybody loves him,” Tierney added. “He is a proper leader, even if he hasn’t got the armband he still leads.”

Chelsea – other than Cesar Azpilicueta – don’t have leaders, particularly in the centre of defence. Kurt Zouma and Andreas Christensen are frustratingly quiet, and although Antonio Rudiger shouts a good game, he only does so when he himself is actually having a good game. Luiz leads no matter the situation, solely taking the blame for that City defeat on his broad shoulders and taking the pressure off the young players through his selflessness. He knows he has nothing left to prove: happy to take criticism in situations where it perhaps should be aimed elsewhere.

“He said to me one game when I hadn’t had my best game,” Tierney said. “We drew, we should have been winning as it was a home game, he was like ‘don’t worry, I’m the big name and I will take the pressure’. I was just sitting there, one of my first games it all went wrong, the fans were on us and we weren’t doing well. He just went: ‘don’t worry about it, you just keep playing your football and I will take the heat’.”

If that isn’t leadership, what is? Even if an Arsenal defeat is transparently not his fault, it doesn’t matter. A ‘mistake-prone’ defender admitting to an error is gold dust to a news outlet: guaranteed hits and Luiz knows it. The Chelsea centre-backs are in a situation where they are unwilling to admit culpability, aware that one bad game means they could be sitting out for the next ten. They’re so evenly matched, which means whichever two are starting are always looking over their shoulder – breeding a tension among them that was clear throughout the season.

They’re not terrible, just poorly coached. All four of them: Rudiger, Zouma, Christensen and Fikayo Tomori have the attributes to be part of a Premier League winning team. But Lampard has really struggled to organise them both in open play and from set pieces, leading to suggestions he should bring in a specialist defensive coach and admit to his own weakness as a manager.

But that coaching can come from within, if you’ve got the right personnel. A David Luiz or a Thiago Silva would more than likely be happy to play a bit-part role, either with a view to earning some valuable coaching experience for their own future ambitions or simply because they are addicted to winning trophies and are happy to coax young players who offer a chance of them winning more.

Chelsea could go for a leader that will play week in week out. Lewis Dunk was the most sensible option – not least because he looks like some sort of face-morphing composite of Lampard and John Terry – but he looks set to stay at Brighton having signed a new five-year contract. And it’s not easy to come from a smaller team and immediately assert your authority as the top man.

Harry Maguire has done it impressively, but while United were in desperate need of a new centre-back, that requirement isn’t quite as strong at Chelsea. Those currently in possession of the defensive roles could see a move for someone like Dunk as unecessary toe-stepping when the strife could instead be sorted through better guidance either from coaches or experienced, title-winning teammates who don’t pose quite the same threat to their future at the club.

Who knows exactly how much Chelsea will end up spending in the transfer window. Much of the outlay on Timo Werner, Hakim Ziyech and the likely move for Kai Havertz will have been offset through the sales of Eden Hazard and Alvaro Morata last summer. But further signings will need to be more savvy, with the coronavirus tightened purse strings in mind.

Chelsea are unlikely to be able to afford to splash big money on a goalkeeper, a left-back and a centre-back, all of which they realistically need to challenge for the title. So a move for a proven winner on a free transfer represents a shrewd bit of business. But it’s a move akin to admitting to a mistake – their own lack of prescience. Planning for the future isn’t all about young players, it’s also about ensuring those young players have the guidance they need to improve. Chelsea messed up by letting their altruistic patriarch leave for Arsenal last summer; now they want another one.