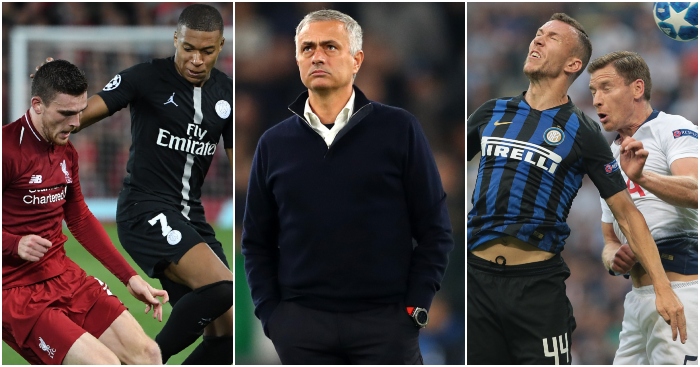 Game to watch – PSG v Liverpool
The first meeting between these two sides lived up to his billing and that was just the group opener. Three games later, the stakes are higher because the consequences are startlingly clear.

Defeat for PSG would most likely end their Champions League campaign. They currently trail the Reds and Napoli by a single point; Liverpool would be out of sight if they can triumph in Paris, while Carlo Ancelotti’s side are favourites to beat Red Star at home – a result which would leave PSG marooned in third place.

For the non-Parisians among us, that’d be a hoot. Perhaps the more reasonable neutrals would far rather have the likes of Neymar and Kylian Mbappe competing with the other big names in the latter stages of the competition, which is what PSG’s Qatari owners also expect. They have made clear their desire for an improvement on the past two round-of-16 exits. So their reaction to flunking at the first hurdle while 15 points clear in Ligue 1 would be absolutely fascinating.

Conversely, should PSG beat Liverpool, they will seize the initiative from the Reds, for whom defeat on Wednesday would not be a killer blow to their hopes of progression. Which presents Jurgen Klopp with something of a dilemma: should he approach the tie more conservatively than he usually might?

Klopp has developed something of a taste for the simpler life in recent weeks and he now has the options within his squad to rotate not only his personnel but also his shape. Liverpool might not have ‘clicked’ consistently this season but they are doing more than enough and remain unbeaten in the Premier League, despite Klopp’s various experiments.

Thomas Tuchel has also tinkered with his side and the switch to three centre-backs appears to be having the desired effect. Unlike at Anfield, when PSG were overly reliant on the individual quality of their attacking stars to compensate for the flaws behind them, the new system seems to have made them a more resilient unit. Tuchel’s side now look far more equipped to thrive without Neymar or Mbappe, which may well come in handy.

Team to watch – Tottenham
Spurs are in a rather better place ahead of this meeting compared to matchday one, when they crumbled late on at the San Siro. Both sides were in something of a slump and the last-gasp triumph offered Inter a shot in the arm which inspired seven consecutive victories.

Even if Spurs won four of their next six, Mauricio Pochettino’s men took longer to click, but it seems it all finally came together on Saturday. Inter is the second of three massive tests this week, with a trip to Arsenal looming large at the weekend.

Pochettino’s men cannot afford any let-up between London derbies because anything less than a win will most likely end their Champions League campaign for this season. The run of fixtures for Inter is no less relentless, with Roma, Juventus and possibly a do-or-die clash with PSV to come in the next fortnight.

Maurizio Sarri offered Inter some of the lessons Chelsea learned from their Wembley whooping. In short: be very wary of Spurs in the first half-hour, and do not give them the opportunity to counter.

So it is fair to assume that Inter will sit back at Wembley, which makes this perhaps the toughest of their three games this week. Watching Spurs probe and attempt to break Inter’s resilience will be intriguing as the likes of Christian Eriksen, Son Heung-min and Dele Alli will have far less space than they were afforded by Chelsea, and most likely less than Arsenal will offer too.

But, as Mauricio Pochettino said prior to beating Chelsea: “Football is about energy.” Spurs have got theirs back, just in the nick of time.

Manager to watch – Jose Mourinho
It’s hard to know where Jose goes from here. The Manchester United boss is facing the kind of task yet to have been achieved by anyone since the Premier League began and he kicked off that task by questioning his players’ commitment and effort.

Mourinho had a point. Whether you feel his man-management methods are outdated or not, it was absolutely fair comment. Too many of his players are not giving their all for the manager and, subsequently, the club. Any kind of rebuttal, albeit too late, can only be delivered through their performance when Young Boys come to Old Trafford on Tuesday.

Which players will Mourinho offer a right of reply? Given it seems the only way United will be in the Champions League next year is if they win it this season, the manager will not be in the mood to dole out yet more chances to players he feels have consistently let him down.

Mourinho did not name names on Saturday, but Paul Pogba was one of the players hooked during the second half. The France star was wretched – again – and his performances would be a test for any manager with greater reserves of patience than Mourinho. Any outbreak of peace this season has been uneasy and given Pogba’s exit was cheered by a large section of the Old Trafford crowd on Saturday, there is an opportunity for the manager to turn the screw on the 25-year-old if he is seeking a scapegoat. Not that he does scapegoats, of course.

Presumably Mourinho has learned by now that too many of his players are not the type of characters to respond to criticism by settling out to prove him wrong. This lot are more likely to run for reassurance to an agent or the media. But Mourinho is not going to change tack now and his players aren’t suddenly going to develop the resolve the manager craves.

The last time United were backed into a corner like this was prior to the Newcastle match at the start of October. When it seemed a defeat would cost Mourinho his job, the players offered a first-half performance as bad as any seen at Old Trafford in many a year. It only improved in the second half because the players perhaps realised they were not being subtle enough.

Eventually, the players will get their way because that is how football works – changing the manager is much simpler and cheaper than completely reshaping an expensive squad. Mourinho most likely recognises this but, unlike his players, when the Portuguese has his back against the wall he comes out swinging.

The Armenian offers the impression of not being too bothered either way, which may be part of the problem. Alexis Sanchez has been absolutely dire since joining Manchester United last winter, but Arsenal can barely claim to have got the better end of the deal. Mkhitaryan’s display on Sunday was hardly an anomaly. So bad was it that Matt Stead was prompted to write this.

Given the playmaker has played the full match in three out of Arsenal’s four Europa League games, Emery will likely opt to start him again, perhaps in the hope he can stumble upon some form in Ukraine in time for the north London derby. But given Mkhitaryan has now failed to score or assist a goal in 16 of his last 20 matches, even Emery’s optimism must be stretched to breaking point by now.

One-v-one battle to watch – Kylian Mbappe v Andrew Robertson
There is a fair chance this meeting won’t take place. Like the last one we were looking forward to. But unless Mbappe’s shoulder injury is terminal, then PSG will surely wheel out their biggest threat.

He and fellow crock Neymar have 13 goals and seven assists apiece this season but Mbappe is probably the star Tuchel is most keen to see take the field. With the stakes so high, Neymar has a tendency to take responsibility for rescuing PSG, but sometimes to their cost. It happened at Anfield and again at Napoli when the Brazilian went it alone in his attempts to pull PSG out of a hole, while Mbappe is more mindful of those around him.

Neymar was shackled by Trent Alexander-Arnold and Joe Gomez in the first meeting on Merseyside and Klopp will need Robertson and Virgil van Dijk to perform a similar job on the opposite flank in France. The left-back had Mbappe largely under control until Neymar teed up Mbappe to score a late equaliser in the Group C opener. Only Roberto Firmino’s even later winner made it inconsequential.

The worrying thing for Klopp is that Tuchel has PSG better equipped to prosper if their two biggest stars are unable to shine. Angel Di Maria and Julian Draxler are showing themselves to be more capable stand-ins than we previously thought. But Mbappe remains the biggest threat, even if he isn’t fully fit. Robertson might want to test that shoulder as soon as he can get close enough…

Football League game to watch – Aston Villa v Nottingham Forest
We told you it would be worth watching the Second City derby on Sunday. Granted, that’s hardly Big Weekend’s most prescient claim, but we’re sticking with the ‘if it ain’t broke, don’t fix it’ approach by encouraging you to keep an eye on Villa Park once again on Wednesday night.

Aitor Karanka’s Forest are the visitors on this occasion as once again Villa host opponents in direct contact with them in the table. Having climbed three places clear of Birmingham with a 4-2 win on Sunday, Dean Smith’s men can continue their impressive form by moving one place below the top six if they can win by two clear goals again.

Only leaders Norwich have scored more than the nine Villa have netted in their last three matches but the Villans will have to breach a secure Forest defence, which has kept three consecutive clean sheets to leave them on the verge of the play-off places. Hardly the unstoppable force versus the immoveable object, but it is the best the Championship has to offer this week.